Innerspace System Corp. General Manager, Jerry Whatley, reported aboard ISC in 2007 with an already exciting career. Jerry started his diving career as a US Navy Diver, followed by commercial diving in the oil and ship handling industry, and founding a Diving / Tug boat business. He is an avid aviation buff serving four years as a commercial helicopter pilot and instructor, specializing in Sling and Film work, before joining Hawaiian Airlines. Jerry’s tenure at Hawaiian Air included time as a heavy jet captain specializing in military contract operations, in the Middle East with active participation in Desert Shield and Desert Storm, and as an air carrier instructor. After leaving Hawaiian for a bit more relaxed environment, he built an ISP from the ground up into ILEC and CLEC Telco operation. Jerry ditched the corporate life in 2007 to return to diving, and found a home at Innerspace Systems Corp. Today you can find Jerry managing sales and production and R&D, as well as military and instructional sales and training. Jerry welcomes visitors, so if you are in the area, stop by and say hello! 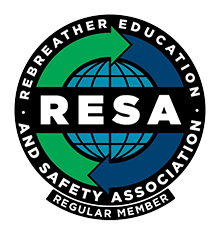